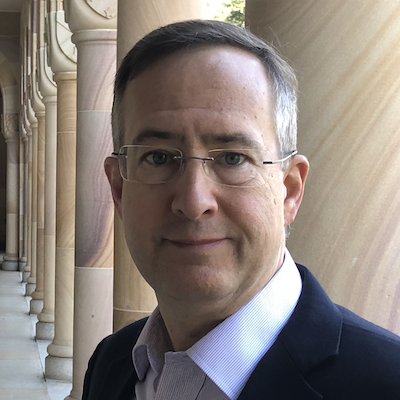 Dr. David Hyland-Wood is an entrepreneur and multi-disciplinary engineer based in Brisbane, Australia.

He has contributed to the evolution of the World Wide Web since 1999, especially in the formation of standards and technologies for the Semantic Web. He has architected key aspects of the Web to include the Persistent Uniform Resource Locator (PURL) service and several Semantic Web databases and frameworks.

Until early 2021, David was researching and building next generation blockchain solutions for enterprise use and space exploration within the Protocols division of ConsenSys. In 2018, he led the acquisition of pioneering space technology company Planetary Resources for ConsenSys, and led the creation of the first international blockchain standard, the Enterprise Ethereum Client Specification by the Enterprise Ethereum Alliance.

David is the author of Linked Data: Structured data on the Web (Manning, 2013) and Programming Internet Email (O’Reilly, 1999) and editor of Linking Enterprise Data (Springer, 2010) and Linking Government Data (Springer, 2011). David’s next book is Humanity: An Unauthorized Biography.

David also serves as Adjunct Associate Professor in the School of Information Technology and Electrical Engineering at The University of Queensland, where he supervises fourth-year and masters degreee software engineering projects, and PhD students researching next-generation blockchain solutions and the application of machine learning systems. He has formerly been entrepreneur-in-residence at the MIND Laboratory at the University of Maryland, College Park, and an adjunct instructor of computer science at the University of Mary Washington.

David contributed to several spacecraft designs, including thermal control system design to the original Iridium satellite prototypes, data reduction on the results of the Long Duration Exposure Facility, materials analysis for the Magellan mission to map Venus (while seconded from the U.S. Navy to JPL), and several U.S. Navy spacecraft. In 2021, David wrote software to prototype cybersecurity and remote tasking algorithms which ran on the Hydra-3/PULSE experiment onboard the International Space Station.

As a deep sea salvage engineer, he was responsible for the salvage plan that lifted MV Wendy, now a popular recreational dive site in Honduras, a World War II victory ship now a recreational dive site in Puerto Rico, and SR-71A serial number 61-7974, lost off the Northern Philippines on 21 April 1989. He qualified as an Australian commercial diver to serve as dive supervisor on the 1998 underwater archaeology expedition to the HMS Pandora, where he was one of the first two divers to uncover the natural history collection in the surgeon's cabin.

David has co-founded three software startup companies and one hardware startup. Tucana Technologies produced the first commercial and scalable graph database. The company was sold to Northrup Grumman Electronic Systems in 2005. Tucana's query language was used as input into the development of SPARQL, the world's first international standard for graph query languages. The boutique software consultancy Zepheira and 3 Round Stones, a data management provider, are still operating.

More information on David’s writing may be found on his Amazon Author Page and his Google Scholar Page. His h-index, a measure of academic contribution, is 22. His academic publications have been cited more than 2,400 times.